One Evidence That Plants Are Smarter Than You Think

We tend to treat plants like passive objects that can ornament a home or yard, although perhaps requiring a bit more care than, say, a vase. But plants are in fact complex organisms that can interact with their environment, sense smells and sounds, communicate with each other and with insects, and even process information.

Plants may not be thinking in a way that we’d recognize, but they are certainly doing a lot more than sitting around splitting water molecules. Here is one thing plants do that look pretty damn smart — even to those of us over here in the Kingdom Animalia.

Plants make their own food out of inorganic compounds through a process called photosynthesis that takes place in the leaves. The ingredients necessary for photosynthesis are light, water and carbon dioxide.

In C3 photosynthesis, the compound to which CO2 is integrated first is a 3-carbon compound. The “enzyme” necessary for this process is known as RuBisCO. C3 photosynthesis is more efficient than C4 or CAM photosynthesis when the environment is cool and moist and when light is plentiful. However, since C3 uses more water than the other two types of photosynthesis, it is not as useful to organisms living in hot, arid environments.

CAM photosynthesis, in honor of the plant family in which this pathway was ﬁrst documented, occurs in many epiphytes and succulents from very arid regions.

Below are the details. 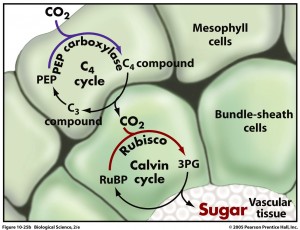 Shortly after the discovery of the C4 cycle the crassulacean acid metabolism (CAM) pathway was dissected and elucidated as a C4 variant. This pathway is found in desert succulents and epiphytes. In the typical C4 cycle, the fixation reaction occurred in a mesophyll cell and the decarboxylation reaction occurred in a bundle sheath cell, in CAM plants the two reactions are separated temporally rather than spatially. The CAM cycle is shown below…notice how all the reactions occur in the same cell but at different times of the day.

The fixation step occurs at night with the guard cells open to receive carbon dioxide during the cool night. This process is driven by use of starch to make the PEP required for PEP carboxylase activity. The malic acid is transported to the vacuole and accumulates there at night. There is a strong pH change in the vacuole at night!

In the desert, water is a precious resource, so desert plants must minimize water loss in order to stay alive. One way plants conserve water involves their ability to close thestomata in their leaves.  Now thats what I call smart

What scientists in the field are now attempting is to engineer plants to be able to close their pores sooner so that precious water is not lost due to drought conditions, which can cause plants to suffer or to often die completely.