“Genetically Modified Plants and the 35S Promoter: Assessing the Risks and Enhancing the Debate”

The 35S promoter, derived from the common plant virus, cauliflower mosaic virus (CaMV), is a component of transgenic constructs in more than 80% of genetically modified (GM) plants. Alarming reports have suggested that the 35S promoter might cause accidental activation of plant genes or endogenous viruses, promote horizontal gene transfer, or might even recombine with mammalian viruses such as HIV, with unexpected consequences. In this article, we discuss the properties of CaMV and the 35S promoter and the potential risks associated with the use of the promoter in GM plants, concluding that any risks are no greater than those encountered in conventional plant breeding.

Introduction
In a recent article, Ho et al. (1999) suggested that the widespread use of the 35S promoter of cauliflower mosaic virus (CaMV) in transgenic plants is “a recipe for disaster”. Ho et al. (1999) base their arguments on three considerations, a) that the CaMV 35S promoter has a hotspot for recombination (Kohli et al., 1999); b) that the 35S promoter has several domains with different tissue specificities and c) that the 35S promoter is very efficient and can function in a wide range of organisms, not only plants but also bacteria and animals. From this they deduce that the 35S promoter could recombine to activate dormant viruses, create new viruses and “cause cancer by the overexpression of normal genes”. As scientists who have worked on CaMV for up to 25 years and have contributed much to the understanding of its molecular biology we wish to put these scenarios in the correct context.

The first plant promoter
Over 15 years ago, CaMV was one of several plant genetic systems being studied for its potential use in plant transformation (Hull, 1983; 1984; 1985). As part of these studies, much basic research went on into understanding the genetic organisation of CaMV and the means by which its genes are expressed and regulated. The CaMV genome was the first significant piece of plant DNA to be completely sequenced (Frank et al., 1980) and the two CaMV promoters, the 35S and 19S promoters, were the first plant promoters identified (Covey et al., 1981; Hull and Covey, 1983c; Odell et al., 1995). Because of the latter discovery, and the finding that the 35S promoter was active in directing heterologous expression of plant genes in a variety of plants, its use in the development of GM plants for research and agronomic applications became widespread.

The virus
CaMV can infect a wide range of crucifers (see Schoelz and Bourque, 1999) and is commonly found in cabbages, cauliflowers, oilseed rape, mustard and other brassicas in temperate countries (Tomlinson, 1987). A survey of a local market, as part of a risk assessment exercise for the Ministry of Agriculture, Fisheries and Food (the UK regulatory authority for biosafety of genetic manipulation of plant pests) in the late 1980s, showed that about 10% of the cauliflowers and cabbages were infected with CaMV. The virus is transmitted in nature by aphids (see Schoelz and Bourque, 1999) and it might be expected that organically grown crucifers, on which the aphids have not been controlled by insecticides, would have higher rates of infection. Infection early in the plant growth might affect the quality, especially of cauliflowers, but later infections show leaf symptoms but little other overt effects. The virus infects most cells of the plant and produces about 105 particles per cell. Each particle contains one molecule of the viral genome, an 8 kbp circular double-stranded DNA with one copy each of the two promoters. 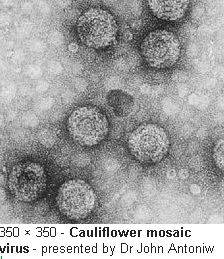 The replication cycle of the virus has two phases (see Hohn, 1999), the first in the nucleus where the viral genome is uncoated, forms a minichromosome and is transcribed to give two RNA species, the 35S RNA (using the 35S promoter) and the 19S RNA (using another promoter). These RNAs pass to the cytoplasm where the 35S RNA acts as a template for reverse transcription as well as a template for translation of some gene products; the 19S RNA is the template for the translation of just one gene product. Various unencapsidated replication intermediates are found in infected cells (Hull and Covey, 1983a) which are estimated to give a further 104 CaMV molecules per cell. CaMV was the first plant virus shown to involve reverse transcription in its replication (Hull and Covey, 1983b; Pfeiffer and Hohn, 1983) but has now been joined by more than a thirty other plant viruses which have the same replication mechanism.

Retroviruses
The retrovirus family comprises a large number of viruses which infect vertebrates and cause a range of diseases including tumors, leukemia and immunodeficiency. Retroviruses express a gene product, the integrase protein, which facilitates the integration of the viral genome into the host chromosomes where it can stay dormant for a considerable time. The virus particles, which are horizontally transmitted, contain RNA transcribed from this integrated genome. On entry into a new host this RNA is reverse transcribed to give the DNA which is then integrated.

Plant pararetroviruses
There are two groups of plant pararetroviruses, the caulimoviruses and the badnaviruses (Hull, 1995; Lockhart et al., 1995) (the International Committee on Taxonomy of Viruses has a more complex classification system but for this article it is best to consider these viruses in these two groups). The caulimovirus group includes viruses which infect groundnuts, soybeans and cassava as well as brassicas. Crops infected by badnaviruses include banana, cocoa, citrus, yams, pineapple and sugarcane. Although there are differences in genome organisation between these two virus groups their replication and the expression of their genes are very similar. The DNA in the virus particles is transcribed in the nucleus (using the 35S promoter) to give RNA which is replicated by reverse transcription to form the DNA molecules which are encapsidated in the virus particles.

Retrotransposons.
Retrotransposons are similar to animal retroviruses in that they are integrated into the host chromosomes and their replication is by mechanisms basically the same as those of retroviruses using a promoter analogous to the 35S promoter. As noted above, they lack the gene products which enable them to spread horizontally between hosts as do the retroviruses. However, there is some recent evidence that they can move very infrequently between hosts (Jordan et al., 1999) by an unknown mechanism. Plant genomes contain large numbers of retrotransposons (Bennetzen and Kellog, 1997). For instance, up to 50% of the maize genome is made up of retrotransposons (SanMiguel et al., 1996) though many of these have mutated and are likely to be inactive.

Relationships between reverse transcribing elements
As noted above, all these elements have a common mode of replication involving reverse transcription of RNA to form DNA. However, functionally reverse transcribing elements fall into two types, the retroviruses, plant pararetroviruses and retrotransposons forming one type and the animal pararetroviruses forming the other type. Within these types, each virus or element is a highly coordinated structure and perturbation of the sequence leads to loss of infectivity or functionality. This is exemplified by the attempts to use cauliflower mosaic virus as a gene vector (see Hull, 1983). In most cases, it is only when closely related sequences are added to or exchanged within the genome that viability is retained. There are many instances of plant and animal cells containing more than one type of reverse transcribing virus or element. For instance, there are several different human retroviruses and no instance of recombination has been found between them. This indicates that there are many constraints on natural recombination.

Conclusions
The paper by Ho et al. (1999) highlights some of the basic features of the controversy over genetically modified crops. The transgenic situation has to be compared with the natural situation not with a utopian one. It is well known that viral sequences recombine naturally and that the vast majority of these recombinants are unsuccessful. Very occasionally new viruses arise, this being one of the major ways by which viruses evolve. However, this recombination is between viruses which occur in plant cells at very much higher concentrations than those of transgenic sequences, whether they be promoters or the transgenes themselves. Furthermore, plants are full of noxious substances which have evolved over many millenia to protect the plant against herbivores and pathogens. Plant breeding and selection has, and is, continuing to minimize(d) the effects that these substances have on humans.

From the arguments above, there is no evidence that the CaMV 35S promoter will increase the risk over those already existing from the breeding and cultivation of conventional crops. . There is no evidence that the 35S promoter, or other retroelement promoters, will have any direct effects, in spite of being consumed in much larger quantities than would be from transgenes in GM crops. Furthermore, there are compelling arguments to support the view that there would be no more risks arising from potential recombination than there are from existing non-transgenic crops.

Pfeiffer, P. and Hohn, T. (1983). Involvement of reverse transcription in the replication of cauliflower mosaic virus: a detailed model and test of some aspects. Cell 33: 781-789.

** NOTICE: In accordance with Title 17 U.S.C. Section 107, this material is distributed for research and educational purposes only. **

41 comments for ““Genetically Modified Plants and the 35S Promoter: Assessing the Risks and Enhancing the Debate””