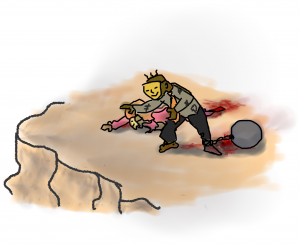 As soon as a baby born in this world. The person get burdened by the parents desire. They want their child to be something. They give everything it takes to make the person to the top.

As the baby grows, the toddler left with its nanny. Two of its beneficiaries are on job ensuring they would have best world. The toddler got its first lesson of loneliness.

We ought to have the ability to read before entering elementary school, so the beneficiaries thought. Then, they give every lessons that matters to the toddler. They give swimming lesson, music lesson, and many more lessons. They ensure the best nutrition for the toddler.

It has anything that its development need but love; a pat in the head and words saying, “I love you, child”.  The second lesson of unwanted.

It’s now already six years old and running well in the elementary. It compete with other toddlers.  Each of them have their beneficiaries walking over hell just to bend them good. So, they were also enhanced in the early.

The competition is fierce. Many of those were lose the light and decided to kill themselves. Some going on strike with their lives. Some plunge themselves into drugs. Some strangled themselves in negative environments. Some walking on limbo.

The toddler isn’t one of them. It has reached the goal and now striving into university. It’s beneficiaries were so lucky. They decide to invest their investment on a career path that they think best for its own goodness.

The toddler wants to have fun. But, what is fun? The toddler isn’t quite get it. It never learns to have it.

No dreams from the past have in its heart. It doesn’t even have a heart that shines like it used to. The third lesson is to throw away dream.

It now have its path on the way that the beneficiaries think. After all, it survives from the harshness of its little heart. It now has the ability to kill all the yearning.

Well, have the toddler asked itself, what’s the use of years of living for? I guess it would have that in the end.

Do you have to be smart to be happy?

Do you have to have everything just to smile?

Do you even know how to live?