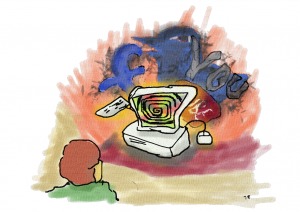 Once upon a time there was a young brave warrior who fought gallantly through the Internet. The warrior sought not for fame. Nor has taken interest in fortune. To quench the thirst for knowledge was his heart had.

Bestowed by a divine lady of the lake, the warrior was tasked to go to Google Docs. With research proposal in mind and a handful of TODO list in hand, the warrior open up the browser. Not knowing what ahead, the warrior had take part in the holy crusade, journeying through the night.

Suddenly, the witch from west appeared. Like a poisonous snake, the raven cast a spell.  Before chanting, the raven witch  spoke,

“Thou art thought of Great Will. How impudent thou pure soul. We shall cast thou a binding. Thou shalt not spake future.”

The raven witch placed rap, death, and original runes. Unknown to the warrior, the witch had chanting a powerful spell. So powerful that the spell also ate the poor witch mind in the process, controlling the witch’s mind with madness. With blood lusted  mind, the raven witch cast the “Friday” spell.

The spell opened the portal to other world. It unleashed beasts. Those made the road with unsighted view. The blue flame bird, known for its little chanting ability breathing its links with other monsters. The evil Plurkers, was lurking from the dead road trying to find forever alone. Ray monster carrying a tube like letter “u” prying on poor man’s eye. Captivated by those monsters, many of the companion was falter.

The most evil of them was not a living thing. Or so we thought. The warrior must fought against the will of the book of Face. It cursed its bearer with many distraction spell. It was originally made with mermaid bloods. The pages was made from succubus’ skin. It ate the victim’s time. The bearer would be sucked; the book was sipping the life out of the poor soul.

Thus, came the morning and the holy task was a big fail. The warrior stood and cried. Unfortunately, that was too late.