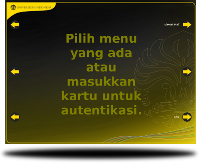 The reason why e-Access exists was because we need a lipstick application to promote the use of Smart Card. It was in late 2006 we began develop this product to provide UI with self-service vending machine.Then, we realize that it can do lot more. It may answer the need of Universitas Indonesia to provide the same service to all of her users.

The main feature of e-Access is to provide great authentication for the system with ease of use to user. This can be achieved using fingerprint and unique smart card information. With this security mechanism, we can provide services that needed user authentication for its availability such as password generation and update. The process itself rendered in a secure online environment, which making the whole system more secure. Well, that’s because we were obsessed and joke with it as the better replacement of ATM. (Yes, according to Indonesia’s law, it won’t be a replacement  😀 )

The first generation of e-Access, installed in the Dirpen building right next to the PPSI Help Desk,was created using Java Swing component. It a Windows-only application because of the fingerprint SDK, which was a great loss. It is fast and stable and still running now. Here are some it’s feature:

The second generation, the one which was installed in UI Library as a beta has several features that worth to mention:

The real loss of the second generation is it still needs to be running under Windows and the lack of designer. The background was made by Ardhi of Humas department on a special request, he wasn’t part of our team. The layout was made by SiakNG team (Thx BasQ, Fernan). The bad CSS and graphic was my fault. 😛

The 2.5 G was born in late 2008. It was a good preview release because of the technology advancement in the world’s technology made it available. Yes, e-Access always using bleeding edge technology just like UI smart card was considered bleeding edge in 2006. Here are the improvement:

The 2.5 G engine is used in Absen Staff client and running smoothly now. The machine need some testing though, especially for social acceptence. Well, we hope can deploy the 2.5 G machine for testing soon.