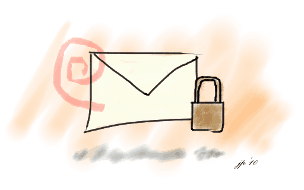 DKIM is a technique based on Yahoo!’s DomainKey. Some may say that it look alike SPF (Sender Policy Framework), but the two is different. DKIM is authenticating the email sent by checking the signature againts the domain’s public key. On the contrary, SPF check the MTA (mail server) that sends the email againsts the domain’s list of MTA. For the simplicity, let’s say that the sending domain is UI and the receiving domain is GMail, so DKIM works like this:

DKIM uses two encyption algorithms: RSA-1 (or just RSA) or RSA256. Those are public and private key pair authentication. The magic is what get encrypted by the private key can only be decrypted by public key and vice versa. But, you can’t decrypt using the same key that used to encrypt the data.

This mechanism is differ from SPF. For mailserver that implements SPF, it would just ask the DNS about a list of legal mailserver that have the right to send email originating from that particular domain.

Let’s us set Postfix to use DKIM. I assume that the mailserver is already functional and running.

There are two applications in Debian repository that serve the same purpose. The first is DKIM-Proxy which is a stand alone service that get injected and then inject back. It would run two processes which one would handle incoming traffic (verifying the email) and the later would do the signing. Both have their own socket to communicate with the mailserver.

The second is DKIM-Milter (or dkim-filter as Debian named it). It uses Sendmail‘s Milter protocol. So, it would run just like a plugin in Postfix. From my experimentation, I choose this because of the convinience for me. But, who knows you would choose the other.

The command will generate two files: mail.txt which contains DNS entry and mail.private which is the private key that would be used to sign the letter. Here’s the example of mail.txt:

The public key entry is being cut to save space pertaining aesthetic aspect in this blog post. I would put the private key into /etc/dkim directory. The directory is non-existence, so we have to create it first.

Now, the DNS part. I would refined the entry to add “t=y” and remove the comments. I’m also appending our domain after _domainkey (watch for the dot after “id”). So, it would be just like this:

And put that in your DNS database and reload it.

Default installation do not run the DKIM-Milter. We need to set the DKIM-Milter in order to run. First, edit /etc/dkim-filter.conf file. Here’s the relevant things that I’ve change to suite my need: (just find the line)

We are using the friendly GMail for testing. Here’s what we do in one of our testing subdomain before we set the DKIM:

Now GMail knows our test subdomain. To check if our verification also works, we send the a mail from GMail to our test domain and would have these on the header:

There are things that I’m not covering, like the multiple selector and using 3rd party like Verisign to accomplish that, handling subdomains, using both DKIM and DomainKey, setup UNIX socket, etc. Don’t worry, for a single domain, the tutorial may run well.